Women’s tear-jerkers. Sugarcoated romantic comedies with ready-made formulas and happy endings to please the female audience. The fair sex. A woman’s place is in the kitchen. Women drivers make a dangerous traffic. This and other preconceptions that have peopled the imaginary of societies for decades – usually shared by men in general – are slowly being forgotten or not taken seriously anymore thanks to a lot of women who have been proving them wrong, in all fields of mankind. And we are not only talking about a certain female rise meaning some kind of fashion or a movement to be followed only to be destroyed on the next corner, by a sexual harassment of some sort or due to a rude comment. “Women have been proving to be on the same level as men, especially in areas where they did not use to have recognition or any recognition at all”, says Marcela Liz, a journalist and entrepreneur who is a main contributor to this website. “And truly all this female movement that’s been going on around the world not only has given more voice to us women, in the sense of respect towards the opposite sex, but it has also showed we are an active culture. And this happens from time to time, since at least the Sexual Revolution in the 1960s, but never ever with such strength as now, when people in general – from both sexes – do not accept intolerance, prejudices, the treason towards themselves and their feelings, and therefore towards true happiness”, says Marcela, she herself a model concerning independence and intrepidness, having founded a magazine of her own and been working with entrepreneurship for more than a decade.

Independence seems to be the word of order in today’s world, attached to the female movement or not – and, of course, everything that’s connected to it: exemption; impartiality; freedom; the person’s character who does not follow determined ideas or pre-established rules. And this brings a profound positive impact for the planet: just see how these freedom and respect movements echo in the economy, in the arts, in the politics, in society as a whole. Those are people who, in a way or another, are trying to change the world. “It may seem a little romantic and utopian but it is real. Today there are many websites and organizations fighting, for instance, violence against women and children, the harassment they suffer”, continues Marcela. “Even before all this problem concerning celebrities who are constantly harassed and/or embarassed in public”, she says.

And if the MeToo movement – the hashtag which ruled the internet to determine how many, and who they were, the celebrities who suffered from harassment – dominated the chats in and out of show business this is just one more proof that the subject and its subdivisions are far from draining out. “This is even more relevant in the cinema, on TV and in the advertising world”, says Felipe de Abreu, a visual media and cinema scholar. “Just take a look at the enormity of beer commercials exploring and objectifying women as sexual animals”, he continues. “Or the low quantity of good roles for actresses of all ages or the relatively low number of female film directors in the world – professionals who rank among the 5% working in the business as filmmakers. Because of that they migrate to independent filmmaking, TV, the advertising, sometimes not even working in their filed of action, without taking too much interest.”Add up the sauce – very bad, by the way – of prejudice and the difficulties inherent to the medium, common stories of declined financing help and even production interruptions due to certain chosen themes and subjects in their work which find little space in conservative societies. 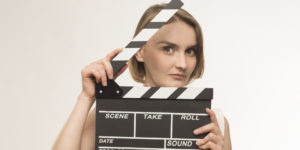 Nevertheless, despite all these problems, both the cinema and the TV have given us quality work done by talented women since at least the beginning of the 20th century, starting out with one of the most famous directors of all time, the German Leni Riefenstahl, helmer of the most famous documentary of the first half in the last century, The Triumph of the Will (1935) – a nazi propaganda film which, apart its direct association with Hitler (who financed the film and other work done by Leni, provoking her success and decline at the same time), was an innovative piece of film, in the use of camera, the shots, establishing an esthetics imitated until today, even by Hollywood productions. “She must have been, at least in the cinema, a great influencer for the role of women, the search for independence, of showing off talent in the chosen profession, even though she served to obscure purposes glamorizing one of the most horrific chapters in the history of mankind”, says Abreu. “But we’re talking the 1930s, before the Second World War, and therefore during an important transition moment in the world.”

From Riefenstahl on, the cinema and other medias gave voice – albeit with difficulties and prejudices – to other women to step in. Then came female directors from all over the world: the British (who worked in Hollywood) Ida Lupino, who started out in the 1940s, to other Europeans like Vera Chytilová (who did Daisies), Lina Wertmuller, Chantal Akerman, Larisa Shepitko, Agnès Varda; from the American Penny Marshall to the New-Zealander Jane Campion and the Polish Agnieszka Holland; the Indian Mira Nair, among many others. “Up until the 1990s generation – like Sofia Coppola, Samira Makhmalbaf, Joan Chen, Lynne Ramsay, Agnès Jaoui, Claire Denis, Kathryn Bigelow, Kirsten Johnson, Lone Scherfig, Ann Hui, Dee Rees, the ones who did important work in Latin America like Lucrecia Martel, Laís Bodansky, Anna Muylaert, Tata Amaral, the list is huge and more diverse than we think, with ramifications stretching to television, multimedia, advertising and even the theatre”, ponders Abreu. “And implications go further and beyond – picture this: even the conservative Hollywood have kneeled down to this healthy tendency: there are an ever-growing number of super productions using women as protagonists and/or heroic role models, starting with the Star Wars franchise, which has put two leading ladies in their films, let alone Wonder Woman and the independent hit Lady Bird, by Greta Gerwig.

If that shows an ever-growing tendency – like predicted by the phrase The Future is Female – which came to stay is something else. “There are still a lot of barriers along the way, many taboos to be fought, but what we see nowadays in the world is a significant change, in every aspect, not only for women, but for the minorities as well”, says Abreu. And certainly a more equalitarian future that little by little is taking shape, burying forever the preconceptions and undeserved phrases like the ones in the introductory part of this article.