The Statues Are Alive!

It’s impossible to conceive the short documentary film Living Statues without the presence of its director, Mirrah Iañez. This is the third work in the format from this young filmmaker graduated from Anhembi Morumbi University and not only continues the yet small – albeit strong – career of Iañez but it also reinforces the engaging and creative spirit which have been characterizing the works of this artist.

A film of extreme sensitivity and lightness, it is also the most ambitious one Mirrah has ever done so far and the one from which she will certainly open space among her peers. The film conjectures that many of these people – who are actually artists from various backgrounds – are in that situation simply because neither they can’t afford to get ahead in life nor have the opportunity in the work market for this to happen. In other words: the profession is usually seen by society overall not as an art form – which it is –, but as an alternative for the lack of jobs or professional qualification. 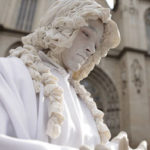 Called estatuísmo, this ability to stand still, sometimes trying to balance on one little stool, a bench on the street, or simply standing on the sidewalk, for long minutes (which can reach hours!), interrupted only when one throws a dime so the artist can change positions, dates back to the street theater, the circus artists, and it is actually a mime technique incorporating elements that for most of the people it’s impossible to control, especially for long periods of time: breathing; blinking; gesturing; the face muscles. Few theorists have come to talk about this artistic niche in the street and theatrical mime practice. Nevertheless it is very strong, especially in the pop music universe (Michael Jackson, anyone?; George Michael, anyone?) and street dances. And it still can be seen in performances such as the hip hop up to the work an actor does before getting onto stage. From the 2000s on Brazilian cities were invaded by living statues, and artists everywhere started forming their own work repertoire, establishing groups dedicated exclusively to this art form, even without formally studying the theater technique, which is the basis for mastering the concept.

Incorporating various different characters – the artists can turn into angels, extraterrestrials, sometimes famous movie, TV and literature characters –, they are most of the times exposed to curiosity, fear, fascination and praise (at least to the ones who know their work and identifiy with their art), melding within the population who most of the times, in the everyday rushing around, have forgotten their own view. That’s what Mirrah Iañez and her team are seeking to rescue and show in their documentary – not only the vision of those who observe, but most of all of the ones who are observed, this way trying to see the universe around them with different eyes. There are no few moments in the film – which in ten minutes says so much for its spectator – where the camera passes to the other side, putting us all right inside those people’s souls. 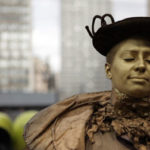 Shot entirely in the streets of São Paulo, with a minimum crew of technicians, Living Statues comes with the energy of the films that intend to (and get to) reach the beauty that only art is capable of: the one that makes us see life itself through another angle, opening up our minds. In the words of the makers: “”We want to present with this documentary, using a poetic language, the true meaning of artistic movement and its representatives, the estatuístas. It is to show that, in order to become a living statue, one needs to study a lot, get to know a lot about the themes and the character, get to know theater techniques (most of them are actors), have physical strengh and body flexibility, know about make up techniques, and know how to dress appropriately. These artists have chosen to be living statues for the love of art.”

METAVERSE: THE POSSIBILITIES FOR THE AUDIOVISUAL

THE ERA OF MICROBUDGET