“Do you know what a Hackathon is?” was the first question everybody heard when they wanted to know what was the documentary feature film The Social Technology about – especially after the film had been officially contemplated to start production, with an international support from the United States. “That was the question both me and Emanuel (Mendes, coproducer and owner of Sincronia Filmes) asked before explaining about the project”, says producer Janaina Zambotti, who, together with Mendes, conceived the whole thing, from the initial idea to the final product, including distribution to movie theaters and the VOD and home video markets. Janaina was referring to the term used around startup and technology companies as a whole which is responsible to put together programmers creating and developing apps that can bring innovative solutions to particular segments and/or companies. In other words, a Hackathon and its results (the apps) is aimed at solving problems for society or companies in general. The term, by the way, is a meeting between the words hack and marathon.

“In our case”, continues Janaina, “we were responsible for covering, in March 2016, the ABEME Hackathon – a company which represents the erotic market et al in Latin America – whose target was to create apps aimed at youngsters and adolescents, and which could have relevant information about sex, condom use, STDs, among other topics usually considered taboo. We shot some interviews and we made an institutional film. The winning apps worked basically like social networks, allowing more interaction among their users. But there were other creative ones, like a virtual game, for instance”, says the producer. Later on the winning apps were presented at the World Aids Conference, in Durban, South Africa. “Our initial plan was to have gone with the winners, making a film about the trip and the whole story”, says Janaina. But the project did not materialize. The producers faced a whole lot of problems to try to go, and apparently the film snatched defeat out of the jaws of victory. “But we didn’t give up”, smiles Janaina. “We kept going after investors and/or companies that could sponsor the film” – and which, at this time, had changed quite a bit from its original conception – “up until a multinational company with offices in São Paulo, an American laboratory, received and listened to us. They’ve got an international grant program for projects dealing specifically with Aids and HIV research. We budgeted the film, the whole scope, and sent it to them. We had to wait, like, four months until receiving the news that, in the end, was superpositive”, says a cheering Janaina. The producers then chose a crew – which consisted basically of a director of photography, Alê Rodrigues; a soundman, Ricardo Vieira, and a director, still photographer Patricia Innocenti, debuting behind the camera. “With the money”, continues Janaina, “which was not a sponsorship per se, we had so much more freedom to make it the way we wanted, to control all the steps, from inception to the final product.” 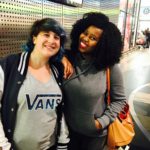 Made in partnership with the South African Consulate, which gave all the logistics to the production team, The Social Technology is not only a film about Aids and HIV. According to the producers, there are a whole lot of subjects and topics which, similar to the solutions presented by the apps at the Hackathon, also discuss modern and contemporary themes such as sexuality, on and off-line relationships, taboos, machismo, feminism, gender violence. “And as important as”, adds Janaina, “the film is also this personal transforming journey for Nathalie, who has such an interesting arc throughout the story: she begins the film in a different way than the one she ends it – and the curious thing about it all is that none of this, the arc and the themes, was planned in advance. Like in every documentary we let things happen naturally, as we moved along, without preplanning too much.” Another interesting point is the fact that, albeit very consciously, the crew itself got to make it into the story, “because this was also a film within a film”, says Janaina. “This became very clear to us from the moment we got there and we did our first meeting” – a meeting, by the way, that is also in the film and which determines many of the themes discussed throughout the narrative, since it is basically a long conversation with Nathalie, where she talks in length about what she does, what she thinks and why she does what she does, and where the spectator has the chance to know a bit about who’s that “protagonist” with whom they will spend one hour and a half in the movie theater.

“But it is not only with Nathalie”, emphasizes Janaina. “Actually the film incorporates two more women who add up to the voice chorus and form the emotional core of the documentary”, says the producer. “The first one is Saidy Brown – the young South-African girl who became known on the internet (and off-line, too) by revealing her HIV positive status to the world via Twitter. She and Nathalie establish such a strong bond and, together, the two are going to meet Mandisa Dlamini at her NGO – a woman with a tragic story in which she lost her mother when she was still a child, a victim of the prejudice, evil and intolerance in the country, still in mid-1990s. Mandisa, an extraordinary woman and such a strong example, created this organization after her mother’s name which takes care and nurses young girls at risky situations.” One of the key points of The Social Technology – and probably never ever imagined by the film crew – is the fact that the movie was shot in one of mankind’s cradle, Africa, considered an important continent in the transforming and evolutionary state of man. Certain themes lifted by the movie are a part of human evolution and which, in a certain degree, constitute the so-called Mamma Africa. Many, by the way, have seen Mandisa, in the movie, as a kind of “mother” for both Nathalie and Saidy in one more shooting process that, similar to others, happened in a completely natural way. 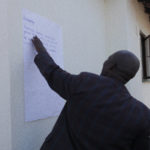 All that is told to the spectator in the form of narrative, as if it was a fiction film with characters, rather than a documentary, even though those characters are real and have such a significative role – because one of Janaina and Emanuel’s concerns was to try to escape from the traditional talking heads kind of documentary. “We didn’t want the movie to become a sort of TV reportage. We wanted it to be, first place, real cinema – that could touch you, that could create an impact, that could have all the elements of a truly cinematic story, with a begining, a middle and an end.” One such strong example comes from the editing, which brings the so-called turning points, and the use of music, composed by the American singer/songwriter Julianna Barwick, and which pinpoints the key moments of the story, moving the narrative onwards.

Shot entirely in Durban and in Eshowe, in the Kwa-Zulu Natal area (one of the world’s epicenters of Aids), where the crew shot the Doctors Without Borders in action, The Social Technology comes with a noble vocation: to speak directly with youngsters – not only because of its protagonist, but also and mainly by the fact that this portion of the population is still very vulnerable to the causes presented in the film. “Even though there’s a lot of information out there”, says Janaina. “Today’s youth, unfortunately, believe that Aids and STDs are a thing of the past, those are problems faced by a distant generation, a generation from the 1980s and 1990s and, therefore, they are immune to them.” During the film, this preconception – one of the many broken in the story – is completely forgotten and the audience gets to know that Aids and HIV, and everything connected to them (the other diseases they cause; the prejudices, etc) are not only far from being cured (on the contrary, the disease is not controlled), but that at the same time the fight and the efforts for this to happen are also very distant from the lack of interest. The biggest example comes from the sequence in the picture which covers the technological aspect of the whole thing: a long testimony of an important Brazilian scientist, Tulio de Oliveira – who’s been living in South Africa for more than two decades –, and responsible for coordinating a team aiming at the solution and the search for cure, or, at least, the disease control. Making DNA sequencing in order to understand the many virus mutations, Tulio and his team work side by side with the South-African government to fight hard the disease which unfortunately hits many people in the continent. But in a way or another this is one of the many role models that Mamma Africa have been showing the world when it comes to nursing and never abandoning its children.