After some years stored in the archives of Sincronia Filmes, the production company decided to rescue the first two short films made by the director and founder of the production company, Emanuel Mendes: Assis & Aletéia (2002) and Amarar (2008), which will undergo a new remastering and should return to the circuit in a while. Made on film, the first in 16mm and the second in 35mm, in a completely independent scheme, the films were made before Mendes opened Sincronia – and produced by other production companies with whom the director was associated at the time. The material was kept on Betacam tapes and, after some conversations, both Mendes and the producer and partner Janaina Zambotti decided to rescue it, not only to check the state of the material, but also because of the interest of the Box Brazil Play, NOW channel. and its subsidiaries, in showing the films on television.

“We had not seen this material for a long time, in the case of Assis, for more than twenty years”, says Janaina, “but, of course, there was an interest and curiosity on our part to know how it was doing, if it was possible to rescue it for, if not exactly a restoration (which is very expensive and laborious), at least a remastering – which would still depend on the evaluation of the archives, in fact a telecine of the original negatives made during the period when the films were being finalized” , she says. “We were surprised to find that the images and sound were still intact, allowing us to tinker with them – including and especially even finding leftover footage, and unused material in the final version that we could take advantage of.” With that, under the command of the senior editor Alberto Ismael, the faithful Betão, and the supervision of both Janaina and the director Emanuel Mendes, the two shorts were finally able to leave an existential limbo to which they were relegated to a new life, this time in the digital universe, and for the TV, streaming and video on demand market in general. 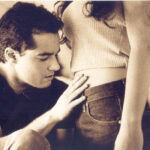 Shot on location in São Paulo and the Minas Gerais city of Pouso Alegre (which borrowed the small train station and locomotive as backdrops), Assis & Aletheia, the first to have this new life, is a surrealist love tale inspired by two passions by Mendes, Spanish director Luis Buñuel (1900 – 1983) and Catalan painter Salvador Dalí (1904 – 1989), especially the duo’s most famous short, Um Cão Andaluz (1929), a landmark of surrealism in cinema, and talks about a young man (actor Fernando Seth, who unfortunately abandoned his career) who happens to meet a young woman (whose face we never see, and played by the young Gabriela Pinheiro) in a train car, and becomes obsessed with her exposed belly button. Written by Emanuel and his cousin, Christiano Lima, the film provoked the most diverse types of effects at festivals – from its first screening at the Gramado Festival in 2002 (courtesy of the selection of filmmaker Carlos Reichenbach, who loved the work) to boos, applause shy or disconcerted reactions after breaking up with several other audiences. To this day, it remains one of the most enigmatic shorts in contemporary Brazilian cinema, working on an obsession of Buñuel’s cinema – the repetition of scenes, situations and/or ideas –, only to see all this shaken by the final twist, the last scene that can change. the whole perception of the film.

“What is at stake is not the action based on dialogue, but the feelings and sensations of the characters”, says Mariana Tavares, from Rede Minas, who interviewed the director for the Belo Horizonte International Short Film Festival in 2008. “ The two films are not black and white, you have to assemble your own narratives in your head. Where reality begins and where fiction ends is up to each one. In this way, the films respect the viewer’s intelligence”, continues Mariana. Obviously this does not mean a ready-made recipe for success or at least a more comfortable welcome on the part of those who watch them. “People have forgotten to think – they are very conditioned by what they see on TV, in advertising, the ready-made formulas, they want to come out of a movie having understood everything, knowing exactly who is the good guy and who is the villain. If they need to think a little more, struggle to understand something, or even deal with ambiguity (which is one of the things they have the most difficulty with), and they can’t, the immediate reaction is to reject what they’ve seen.”

Challenging and fascinating, Assis & Aletheia is back, and joins the third work of director Emanuel Mendes, the irreverent fake documentary É Quase Verdade (2014), on TV screens. To watch them, just tune in to Box Brazil Play and its subsidiaries.

Milena Sardoz is a journalist, publicist and regularly contributes to this site.